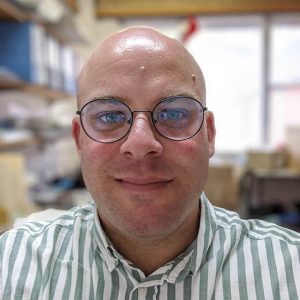 Stu completed his teaching internship at what was Rokeby High School in 2010. Since then, he’s enjoyed a number of teaching and leadership roles across the school and is incredibly proud to have been on board through a period of significant change and development at Bayview Secondary College.

Stu’s teaching focus has been English and Humanities subjects, primarily in the upper-secondary grades, and he gained significant leadership experience as manager/co-ordinator for the Year 9 and Year 10 cohorts. Since 2018, Stu has worked in a project role, co-ordinating Bayview’s participation in the Middle Years Literacy Project, work that has seen him actively engage with staff and students at Bayview’s feeder schools, aiming to improve student writing outcomes.

Among the highlights of his time at Bayview, Stu has really enjoyed organising Year 10 trips to the Gold Coast and Melbourne, seeing Nell Hentschel and Mel Burnett travel abroad on the Frank MacDonald Memorial Prize battlefield tour, as well as the day-to-day interactions with students and colleagues that make Bayview such a vibrant place to work.

Prior to retraining and commencing his teaching career, Stu lived in the UK and worked in the European travel industry for a number of years. His first career path was in media and he has worked as a journalist at a number of mainstream newspapers and online media outlets over the years. Stu enjoys cycling in his spare time and has grand plans to one day tour Europe by bike.